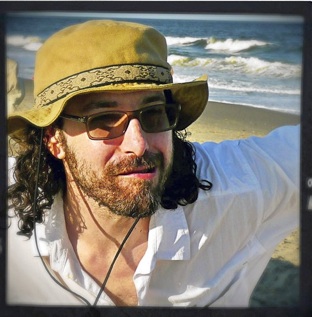 A father reflects on his son’s creative magnificence – and his heartbreaking mental illness.
July 17, 2012 | By W.J.T. Mitchell

In the fall of 1991 I received a disturbing call from my son Gabriel, who was a freshman at New York University at the time. He informed me that he had experienced a revelation. “Dad,” he said, “it’s obvious to me that the only authentic path forward for me is to give up everything and become homeless.”

I suggested to him that if he wanted to do something for the homeless, I was sure NYU had programs that would prepare him for that kind of work. But he assured me that the only authentic way to help the homeless was to join them. He had already given away his winter coat to a homeless man and he was spending his book money taking the panhandlers in Washington Square to lunch.

My alarm over these developments was somewhat eased, however, by the conclusion of our conversation. “Dad,” he said, “do you suppose I could get a new CD player for Christmas?” Thank heaven, I thought, for the irresistible lure of good old-fashioned American consumerism. “Absolutely,” I said, and we finished the conversation with a discussion of what brand would be best.

Two years later, Gabe had to be committed to a psychiatric ward with a diagnosis of schizophrenia. In the interim he went through alternating periods of rage and depression, delusion and visionary insight, destructive violence and the creation of poems and wild hieroglyphic drawings.

Then, miraculously, a long, slow rebirth process began – a 20-year odyssey of return, adventure, setbacks and triumph. Gabe emerged from the hospital after two weeks, calmed by a powerful sedative that made him like a sleepwalker. “Dad,” he told me, “they tell me I have a thought disorder. But I don’t have any thoughts. I feel as if I’m living under water.” But Gabe never had to return to the hospital. And on the advice of our doctors, he did not return home to live with us. Instead he moved into a facility in Humboldt Park operated by the Thresholds agency where he joined the community of mental illness and addiction, living amid the world of street gangs, alcoholics and prostitutes. Slowly he found his way out of this labyrinth, partly through therapy, partly through work and friendships with what are called “prosumers” in the world of mental illness – people who have crossed the threshold into some form of health: work, service to others, a measure of calm and optimism.

In 2004, Gabe made a decisive step forward, taking real initiatives toward independence. He landed a regular job as a produce clerk at the Jewel food store, where he repeatedly won awards for customer relations (he was especially solicitous with elderly women) and found a lovely rental apartment in Marina City. He began to blossom as an artist, particularly as a filmmaker. He wrote visionary scripts complete with story boards, graphic novels and poems, and began to work on cubic grid sculptures based in speculative cosmologies. He began to move beyond the mental health community as well, developing friendships within Chicago’s artistic and activist communities, and returning to Columbia College in the fall of 2011 to study documentary filmmaking.

But even as he moved on, he continued to look back. His film scripts combined autobiographical reflections on the dark passages of his life with larger narratives of the history of philosophy (“A Brief History of Light”) and the struggle of rationality and chaos (“Philosomentary”). “Desolation Row Revisited” is a music video with lyrics illustrated with cartoons narrating the ordeal of Humboldt House. His film, “Crazy Talk,” is a documentary composed of interviews with psychiatrists and the mentally ill, ordinary folks and the homeless. But it is also an attempt to re-create the experience of mental illness from the inside with all the tools of cinematic sounds and sights – the worlds of visual and auditory hallucination that are so characteristic of schizophrenia, and so suited to the specific medium of film. Many of these films are available on his website, philmworx.com.

All the while that Gabe was making such steady progress, gaining increased mastery and recognition as a filmmaker, he was accompanied by the dark forces of his illness, which often burst out in episodes of anger and frustration. We knew that right alongside his rebirth as an incredibly charming young man – handsome, smart, honest, kind and gentle – he was still fighting with (and protecting his parents from) the dark world of auditory hallucination in which all the passing thoughts anyone might have about their own shortcomings are amplified into a cacophony of sneering, self-destructive voices.

On June 24, I received a text message from my wife: “Problem with Gabe. Come home.” When I reached home a few minutes later, my worst nightmare became a horrible reality. Gabe had jumped from the balcony of his apartment on the 59th floor of Marina City. Our beautiful, loving son was lost to us forever. When we entered his apartment we expected to find chaos. Instead, everything was in order, the bed made, his projects neatly assembled on his drafting table, his laptop laden with recently sent emails to fellow filmmakers who wanted to work with him. It seemed obvious to us that he did not plan his suicide. An obsessive communicator, he did not leave a note. He was driven over the edge, like the falling men and women of 9/11, by the intolerable flames inside his head, fleeing a tsunami of voices.

Gabe was not “a schizophrenic.” In fact, there is no such thing. People with mental illnesses are people first in all their singularity and complexity. The label of schizophrenia is just another burden, a terrible stigma that has to be endured by the mentally ill. It is the psychological equivalent of a racist stereotype, and yet there is no getting away from it, especially in the clinical world that attempts to heal its symptoms.

People always say that the death of a child is unimaginably painful, and they are right, except that we no longer have to imagine it. We feel it in every moment and every part of our lives that he touched, which is to say, everywhere and in everything. But his life was also a comedy and a triumph in which he gave us 20 years of joy and sorrow, love and tears, and a legacy of creativity that can now be shared with the whole world. We mourn and celebrate him at the same time. We hope that his example and his work will give courage to the many families who struggle every day with the affliction of mental illness and dispel the ignorance of a society that often fails to see that all of us are part of a world in which madness and human magnificence are inextricably mingled.

W.J.T. Mitchell, the author of “Seeing Through Race,” is a professor of English and art history at the University of Chicago. Visit philmworx.com to view Gabriel Mitchell’s work.